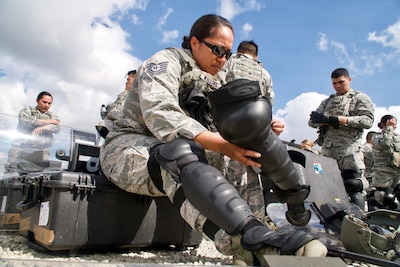 As criminal activity is on the rise in rural areas, the Mississippi Emergency Management Agency is stretched thin. There isn’t enough law enforcement support to respond to the looters and to help injured civilians in hard-to-reach places. The Mississippi governor declared an emergency in Perry County, and enacted an Emergency Message Action, asking for support of outside states and local, state and federal agencies to respond to the affected region.

Disasters like this happen all the time, which is why about 1,000 participants from federal, state and local entities came together here for this year’s iteration of exercise Patriot South, held Feb. 13-15.

After the triggering event of Patriot South, the catastrophic earthquake, the airmen from Hawaii united with the Mississippi Department of Wildlife, Fisheries and Parks’ Special Response Team at Camp Shelby, Mississippi, where they were unofficially deputized for the training events. Over the next three days, the airmen served as much-needed backup for the responders in a series of trials, such as supply delivery, medical care, search and rescue, VIP escort, crowd management and even herding cattle in order to clear an airfield.

“Based off my experience of working with active-duty airmen, the training we went through felt very realistic,” said Airman 1st Class Marvin Bumanglag, a 154th SFS fire team member. “Some parts got really stressful, but as long as we stayed in communication with each other, we were able to handle each situation they threw at us. It also helped me get to know the people I work with better and now I’ve got a lot more trust and confidence in them.”

Each training activity was carefully planned to mimic an actual emergency event that had occurred during the past year.

While the two units haven’t collaborated before, one of the largest advantages of the civilian-military police team was its diversity of experience. Several of the MDWFP members hail from military backgrounds and have been recognized as one of the best team of trackers in the nation. Out of the 94 security forces squadrons in the ANG, the guardsmen of the 154th have the highest deployment rate, and many of its airmen have civilian careers as police officers or other emergency management experience.

Throughout the exercise, participants had plenty of opportunities to share their expertise and learn something new from their new partners.

“It’s remarkable how we only met each other a few days ago, but our teams just gelled together like they’ve been working together for their past ten to fifteen years,” said police Capt. Dale Bell, MDWFP SRT chief. “This experience has definitely been a bridge-builder between the Air National Guard and the Mississippi Department of Wildlife, Fisheries and Parks; a complete win-win for the state and the country.”

Exercises like this also serve as a valuable opportunity for junior airmen to step up and assume responsibilities that normally would fall on higher-ranking personnel, such as operating the law enforcement operations center and leading a fire team. Air Force Senior Master Sgt. Clifford Ramson, 154th SFS exercise evaluator, said it’s common for leaders to be diverted to other taskings or experience field-related injuries, making it important for all airmen to be ready to fill the shoes of their superiors.

After four months of planning and three days of crisis management, the exercise came to a successful close.

Just like the unpredictable events the responders overcame in Patriot South, Air National Guard units across the nation and U.S. territories are standing by to lend a hand to their neighboring states and active duty components around the world. Whether it’s an earthquake, blizzard, flood or tsunami, they have the unique role and capability to help those in need at a moment’s notice.