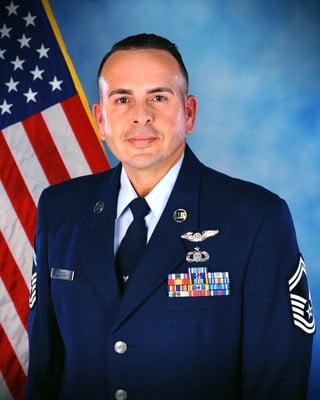 “We were flying about 500 feet above water when they started signaling to us,” Correa said, adding the boaters’ actions indicated they were clearly in distress.

The air crew’s routine counterdrug patrol over the Gulf of Mexico turned into a rescue mission, a first for Correa.

As an airborne sensor operator and linguist with the Host Nation Rider program, a component of the larger National Guard Counterdrug program, Correa’s Spanish language skills and knowledge of maritime communications came into focus when the Super Hercules’ pilots spotted the distressed boat.

“There was this sense of urgency,” he said, adding that the Coast Guard HC-130 he was on was equipped and prepared for search and rescue at all times. “We had the capability to immediately assist for this event.”

Correa and the Coast Guard crew he was serving with put those capabilities to the test.

“By the time we made our first turn back to the boat, water was getting inside [the boat],” he said.

On the second turn back, the boat was starting to sink. After the pilot’s third and final turn, the boat had capsized – its passengers clinging to the upturned hull.

While the plane’s loadmasters dropped survival gear close to the distressed boat, Correa turned from his Air Force-trained role as a sensor operator to that of a radioman.

“I was trying to hail two boats nearby, calling them by their names with no success,” he said.

At that point, he broadcasted an emergency message on the international distress frequency. The captain of a fishing vessel responded to the call, but he and his crew only had a visual on the Super Hercules, not the capsized boat.

“So I gave him the position of where the boat was, and vectored [him] to the location while making contact with Costa Rican authorities,” Correa said.

Not long after he made contact with the fishing vessel crew, they arrived at the boat’s location and saved the four passengers.

“I have no doubt if the whole crew [from the HC-130] didn’t react the way it did, the results would’ve been different,” he said. “I was proud to be a part of that joint mission.”

For Correa, the rescue served as a testament to the National Guard’s role in building partnerships.

“I was the only Air Guardsman and I had only been on one operation with one of the Coast Guard crew members before,” he said. “But the way everybody clicked during the mission, and the training involved, made all the difference.”

Correa said the incident also highlighted the importance communications play in military and rescue operations, especially in a region where English is often not the predominant language.

“When you perform a mission on an aircraft decisions have to be made properly and timely,” he said. “If a language barrier becomes an issue, the mission will not be accomplished.”

Correa said his role in the Host Nation Rider program is rewarding, providing him the opportunity to make a direct impact on counterdrug and rescue missions.

“We are a unique program within the Department of Defense and the Air National Guard,” he said. “The type of work we do does make a difference.”