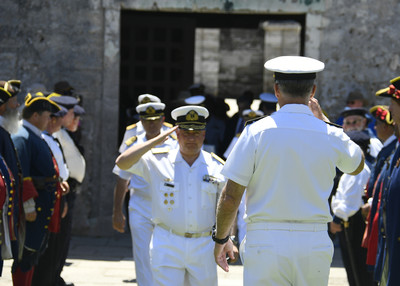 MSTs support the U.S. global strategy by building and strengthening working relationships between the U.S. and partner nations and improving interoperability through face-to-face meetings.

“Our regional challenges, to both Argentina and the U.S., require cooperative solutions,” said Buck. “Our ability to counter an amorphous, agile threat network, or rapidly respond to a natural disaster is contingent upon our ability to leverage our strengths and operate in synchronization with you [Argentine Navy] in an interoperable way.”

Over the past year, U.S. and Argentine navies have participated in many exercises including Unitas and Panamax. All of these cooperative efforts enabled effective interoperability and aided each navy’s ability to work alongside one another such as immediately responding to search and rescue efforts for the Argentine submarine ARA San Juan.

“First I would like to express our special thanks for the rapid support from the U.S. in the search for the ARA San Juan,” said Gerardo. “We will never forget the support you provided us, we know that all of you will continue to work very hard in these talks and look forward to operating together in the future.”