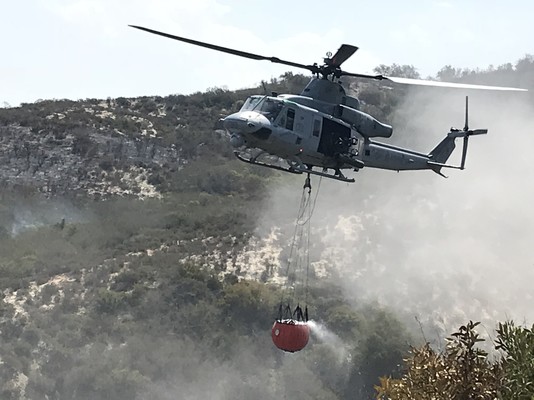 Later that evening, a second fire broke out in Horno, which quickly covered over 1,000 acres. MAG-39 mobilized another two Venoms from HMLA-267 and two more from HMLA-169. During the eight flight hours in support of the “Horno Incident,” the four aircraft conducted 188 drops.

In all, six aircraft from 3rd MAW conducted nearly 250 water drops over two separate fires in 30 hours. Without aircraft support, firefighters would have been forced to climb on foot down a steep canyon to fight the fire in 90-degree heat.

Residents have since returned to their homes and regular base operations have continued.

“MAG-39 is proud to be a part of the team effort that fought the recent wildfires in and around Camp Pendleton,” said Col. Matthew Mowery, MAG-39 commanding officer. “Using aircraft to complement the work of numerous brave firefighters on the ground reduces some of the risk for ground crews and allows rapid delivery of water to places without a readily available source. Our combined efforts this weekend ensured no loss of life or damage to structures and we stand ready to assist in the future.”