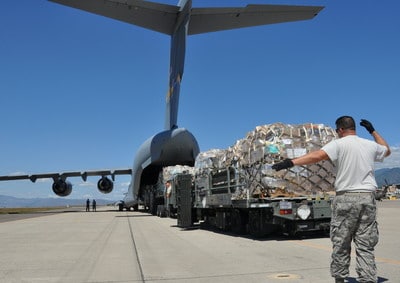 The three missions were planned to maintain the aircrews’ flying currency and readiness requirements, while at the same time delivering the cargoes of medical supplies, an ambulance and several tons of food to outreach organizations in their respective countries.

“We all feel a great sense of pride when we get the opportunity to fly down south and have the chance to make a difference in people’s lives,” said Capt. Sean Gribben, a pilot with the 300th Airlift Squadron. “While we were taxiing to the ramp in Honduras, we went right past an elementary school and its fence line was crowded with young children waving at us and jumping up and down. It’s in those moments that you know you are making a difference.”

The humanitarian aid was donated by several U.S.-based charities. Altogether, the donated cargo totaled over 88,000 pounds and was valued at around $90,000. According to the donating organizations, the aid supplies are estimated to touch the lives of nearly 130,000 people overall.

These periodic missions are planned months in advance and are one of the major peacetime functions of the Air Force Reserve’s airlift fleet. They allow for aircrews to accomplish several training and readiness items, including periodic recertification and practicing perishable skills while operating in international environments, something that can’t be done by flying within the contiguous U.S.

According to Tech. Sgt. Wil Lee, loadmaster with the 300 AS, these missions provide opportunities for the loadmasters that are difficult to replicate in other missions. Loadmasters are responsible for managing the cargo while the aircraft is in flight.

“Loadmasters have to fly at least every 60 days, and this mission will keep us current for another 60,” said Lee.

Additionally, another loadmaster completed a checkride – an 18-month recertification requirement.

“For training, this mission gives us flight time for training and delivering cargo, and it keeps us sharp,” said Lee. “It’s a refresher for our knowledge – there is a knowledge-based test from a book that has to be completed before the hands-on part which is what we get accomplished here.”

The pilots also gain valuable experience from these combined training and humanitarian missions.

“Off-station training missions that go through Central America and the Caribbean always provide a great training environment for the aircrew,” said Gribben. “It can be a very challenging place to fly when it comes to weather and language barriers, which are things that we don’t get to see every day.”

The cargo was donated by charities within the U.S. and airlifted in conjunction with the Denton Amendment, a State Department/USAID program that enables humanitarian charities and U.S.-based nongovernmental organizations to use space available on military cargo aircraft to transport humanitarian goods to countries in need. Consequently, these missions are flown at no additional cost to the U.S. taxpayers. Once delivered, the cargo will be received by local outreach organizations, who then distribute the supplies. Special precautions are taken to ensure that the cargo benefits the intended recipients.

“The combination of training on these missions and the humanitarian aid aspects go together quite well,” said Gribben. “I know the Honduran people appreciate the efforts we make in coming down on these missions. It is very rewarding for us and also provides great training that is invaluable for our crew force.”

Lee concurred. “It feels good – you know that you’re giving people what they really need, and you know they appreciate it when it gets there. It’s why I like doing what I do here. [The C-17] isn’t just for war, because we bring stuff to help out everybody.”