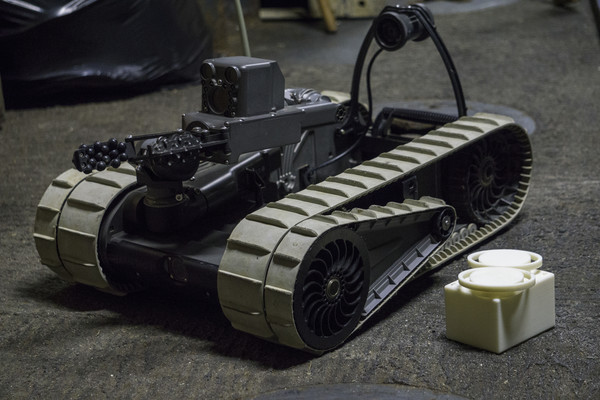 This innovative technique is the process of replicating a digital 3-D model in the real world. 3-D printing software breaks the digital model down into layers which can be reproduced by the printer. The printer then builds the model from the ground up, layer by layer, creating a tangible object.

Sgt. Adrian Willis, a computer and telephone technician, was thrilled to be selected by his command to work with a 3-D printer.

“I think 3-D printing is definitely the future – it’s absolutely the direction the Marine Corps needs to be going,” said Willis.

The Marine Corps is all about mission accomplishment and self-reliance. From day one in boot camp recruits are taught to have a ‘figure-it-out’ mindset. 3-D printing is the next step for a Corps that prides itself on its self-sufficiency.

“Finding innovative solutions to complex problems really does harken back to our core principles as Marines,” Willis said. “I’m proud to be a part of a new program that could be a game-changer for the Marine Corps.”

CLB-31 uses its 3-D printer as an alternative, temporary source for parts. The purpose is to assist Marines with mission accomplishment in the face of hardship, such as mechanical parts failing.

As a permanently forward-deployed unit, it can be both crucial and difficult for the 31st MEU to get the replacement parts it needs for sustained operations. The 31st MEU’s mission – to deploy at a moment’s notice when the nation calls – is not conducive to waiting for replacement parts shipped halfway around the world. Capabilities like 3-D printing, which the 31st MEU can take with it when it deploys on Navy shipping, feed the MEU’s expeditionary mandate.

“While afloat, our motto is ‘fix it forward,'” said Chief Warrant Officer 2 Daniel Rodriguez, CLB-31’s maintenance officer. “3-D printing is a great tool to make that happen. CLB-31 can now bring that capability to bear exactly where it’s needed most – on a forward-deployed MEU.”

A VMFA-121 F-35B had a plastic bumper on a landing gear door wear out during the MEU’s Spring Patrol 2018. Though a small and simple part, the only conventional means of replacing the bumper was to order the entire door assembly – a process that is both time consuming and expensive. Utilizing a newly released process from Naval Air Systems Command for 3-D printed parts, the squadron was able to have the bumper printed, approved for use and flown within a matter of days – much faster than waiting for a replacement part to arrive from the United States.

“As a commander, my most important commodity is time,” said Lt. Col Richard Rusnok, VMFA-121 commanding officer. “Although our supply personnel and logisticians do an outstanding job getting us parts, being able to rapidly make our own parts is a huge advantage as it cuts down our footprint thus making us more agile in a shipboard or expeditionary environment. In this instance we were able to team with our sister unit, CLB-31, to not only rapidly manufacture a replacement but also save thousands of dollars in the process.”

VMFA-121 also made history in March as the first F-35B squadron to deploy in support of a MEU.

Making further use of the MEU’s 3-D printing capability, the MEU’s explosive ordnance disposal team requested a modification part that acts as a lens cap for a camera on an iRobot 310 Small Unmanned Ground Vehicle – a part which did not exist at the time. CLB-31’s 3-D printing team designed and produced the part, which is currently operational and is protecting the drone’s fragile lenses today.

The templates for both the plastic bumper and lens cover will be uploaded to a Marine Corps-wide 3-D printing database to make them accessible to any unit with the same need.

As the Indo-Pacific region’s force-in-readiness, the 31st MEU continues to brainstorm new opportunities for its 3-D printer, such as aviation parts and mechanical devices that can be used to fix every-day problems. Though only in the beginning stages of development, the 31st MEU will continue to push the envelope of what 3-D printing can do in the continued effort to make the MEU a more lethal and self-sufficient air-ground-logistics team.