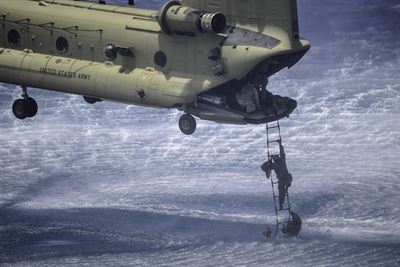 The BSAG, BCG, SOCSOUTH and 1-228th AVN personnel executed Fast Rope Insertion and Extraction System (FRIES) training, helocast operations and recovery with the Jacobs Ladder, and open water hoist training in order to increase the capabilities of the Belizean forces to conduct counter-transnational organized crime operations within their land and maritime borders.

U.S. Army Capt. Paul Peterson, 1-228th AVN assistant operations officer, said that although the training event was a great step for the BSAG and BCG members to become proficient in helicopter operations, he thinks a bigger benefit for our partners came in the form of planning and operating with outside air assets.

“Throughout the training event we went into briefs together and they asked us questions to learn how we operate, so learning the mission-planning process was important to them,” Peterson said.

Peterson also said the training was equally beneficial for the pilots and crews because of the qualifications gained, and the experience of working with partner nation ground and maritime forces.

The U.S. Ambassador to Belize, Carlos Moreno, witnessed a training scenario first hand and praised the cooperation between all of the military forces.

“These kinds of partnerships are essential in maintaining a good, productive relationship, and ultimately serves to protect American interests abroad and on the mainland,” Moreno said. “Anytime you develop a partnership like this, it really serves to tighten those bonds and it mutually supports what we both want to accomplish here.”