‘Beyond the Horizon’ exercise strengthening partnership with El Salvador 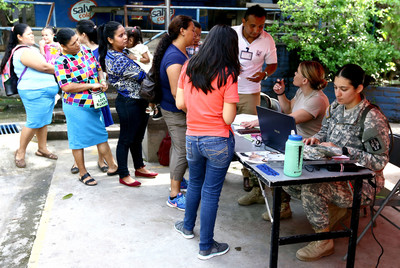 Some 1,800 Soldiers from Combined Joint Task Force Hope are providing humanitarian assistance as part of their training during the Beyond the Horizon exercise in La Paz, El Salvador. The U.S. Army South-led mission began May 12 and runs through Aug. 4, and includes Soldiers from all components, Air Force and Marine service members, Salvadoran soldiers and personnel from non-governmental organizations.

The scope of training includes the construction of two schools, as well as extensions to two existing schools and a clinic in the La Paz Department, a rural area in the southeastern part of the nation that is underdeveloped and in need of services, said Maj. Al Cavazos, CJTF Hope Information Operations Cell officer-in-charge. The task force is also providing medical and dental treatment at various locations as well.

“The purpose of Beyond the Horizon is to conduct civic assistance and medical and engineering support to show U.S. support and commitment to El Salvador,” he said. “These projects will be completed working hand-in-hand with the Salvadoran military and non-governmental agencies to provide medical and engineering support to local populations. It is valuable for everyone.”

Most of the Soldiers are from National Guard units out of Nevada, Texas, West Virginia, Florida, Puerto Rico, Minnesota and Texas, Cavazos said. Those Soldiers rotate out every two to three weeks.

Since construction of the facilities takes longer than two or three weeks, the Salvadoran soldiers who are partnering with U.S. Soldiers provide continuity in the construction work and planning, he said.

Fortunately, most of the rotating units include Soldiers with Spanish-speaking ability, he said. This greatly facilitates communications and coordination. Cavazos himself is fluent in Spanish and is heavily involved in translating activities.

What do the El Salvadorans think of the U.S. presence here?

“The military and civilians have shown gratitude and appreciation for what we’re doing here,” he said.

Cavazos said that over his 26-year Army Infantry career, which included deployment to Iraq, he has learned to read body language. In some of the places he has been, he said, it has been apparent to him that American presence was not welcome.

However he doesn’t believe this is the case in El Salvador. Instead, he said the people he is working with now seem to appreciate that American Soldiers are making improvements in their lives and the lives of their children.

Throughout the day, local residents in stores and shops were seen chatting with the U.S. Soldiers, and for those who couldn’t bridge the language gap, smiles were exchanged.

Beyond the Horizon is an annual U.S. Army South exercise. Next year, the exercise will be held in Guatemala.